From Wikipedia, the free encyclopedia
(Redirected from Lughnasa)

Lughnasadh or Lughnasa (pronounced LOO-nə-sə; Irish: Lúnasa; Scottish Gaelic: Lùnastal; Manx: Luanistyn) is a Gaelic festival marking the beginning of the harvest season that was historically observed throughout Ireland, Scotland and the Isle of Man. Originally it was held on 31 July – 1 August, or approximately halfway between the summer solstice and autumn equinox. However, over time the celebrations shifted to the Sundays nearest this date. Lughnasadh is one of the four Gaelic seasonal festivals; along with Samhain, Imbolc and Beltane. It corresponds to other European harvest festivals, such as the Welsh Calan Awst and the English Lammas. Lughnasadh is mentioned in some of the earliest Irish literature and is believed to have pagan origins. The festival itself is named after the god Lugh. It involved great gatherings that included religious ceremonies, ritual athletic contests (most notably the Tailteann Games), feasting, matchmaking and trading. There were also visits to holy wells. According to folklorist Máire MacNeill, evidence shows that the religious rites included an offering of the first of the corn, a feast of the new food and of bilberries, the sacrifice of a bull and a ritual dance-play. Much of this would have taken place on top of hills and mountains. Lughnasadh customs persisted widely until the 20th century, with the event being variously named ‘Garland Sunday’, ‘Bilberry Sunday’, ‘Mountain Sunday’ and ‘Crom Dubh Sunday’. The custom of climbing hills and mountains at Lughnasadh has survived in some areas, although it has been re-cast as a Christian pilgrimage. The best known is the ‘Reek Sunday‘ pilgrimage to the top of Croagh Patrick on the last Sunday in July. A number of fairs are also believed to be survivals of Lughnasadh, for example the Puck Fair. Since the latter 20th century, Celtic neopagans have observed Lughnasadh, or something based on it, as a religious holiday. In some places, elements of the festival have been revived as a cultural event.

In Old Irish (or Old Gaelic), the name was Lugnasad (pronounced [luɣnəsəð]). This is a combination of Lug (the god Lugh) and násad (an assembly), which is unstressed when used as a suffix.[1] Later spellings include Luġnasaḋ, Lughnasadh and Lughnasa. In Modern Irish (Gaeilge), the spelling is Lúnasa, which is also the name for the month of August. The genitive case is also Lúnasa as in Mí Lúnasa (Month of August)[1] and Lá Lúnasa (Day of Lúnasa).[2][3] In Modern Scottish Gaelic (Gàidhlig), the festival and the month are both called Lùnastal.[4] In Manx (Gaelg), the festival and the month are both called Luanistyn. The day itself may be called either Laa Luanistyn or Laa Luanys.[5] In Welsh (Cymraeg), the day is known as Calan Awst, originally a Latin term,[6] the Calends of August in English.[1]

An altar depicting a three-faced god identified as Lugh/Lugus

In Irish mythology, the Lughnasadh festival is said to have been begun by the god Lugh (modern spelling: Lú) as a funeral feast and athletic competition (see funeral games) in commemoration of his mother (or foster-mother) Tailtiu.[7] She was said to have died of exhaustion after clearing the plains of Ireland for agriculture.[7] Tailtiu may have been an earth goddess who represented the dying vegetation that fed mankind.[8] The funeral games in her honour were called the Óenach Tailten or Áenach Tailten (modern spelling: Aonach Tailteann) and were held at Tailtin in what is now County Meath. The Óenach Tailten was similar to the Ancient Olympic Games and included ritual athletic and sporting contests. The event also involved trading, the drawing-up of contracts, and matchmaking.[7] At Tailtin, trial marriages were conducted, whereby young couples joined hands through a hole in a wooden door.[9] The trial marriage lasted a year and a day, at which time the marriage could be made permanent or broken without consequences.[7][10][11][12][13] A similar Lughnasadh festival, the Óenach Carmain, was held in what is now County Kildare. Carman is also believed to have been a goddess, perhaps one with a similar tale as Tailtiu.[14] After the 9th century the Óenach Tailten was celebrated irregularly and it gradually died out.[15] It was revived for a period in the 20th century as the Tailteann Games.[10][14] From the 18th century to the mid 20th century, many accounts of Lughnasadh customs were recorded by folklorists and other writers. In 1962 The Festival of Lughnasa, a study of Lughnasadh by folklorist Máire MacNeill, was published. MacNeill drew on the historic accounts and on earlier medieval writings. She concluded that the evidence testified to the existence of an ancient festival on 1 August that involved the following: 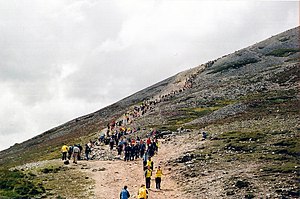 Pilgrims climbing Croagh Patrick on “Reek Sunday”. It is believed that climbing hills and mountains was a big part of the festival since ancient times, and the “Reek Sunday” pilgrimage is likely a continuation of this.

[A] solemn cutting of the first of the corn of which an offering would be made to the deity by bringing it up to a high place and burying it; a meal of the new food and of bilberries of which everyone must partake; a sacrifice of a sacred bull, a feast of its flesh, with some ceremony involving its hide, and its replacement by a young bull; a ritual dance-play perhaps telling of a struggle for a goddess and a ritual fight; an installation of a head on top of the hill and a triumphing over it by an actor impersonating Lugh; another play representing the confinement by Lugh of the monster blight or famine; a three-day celebration presided over by the brilliant young god or his human representative. Finally, a ceremony indicating that the interregnum was over, and the chief god in his right place again.[16]

Many of Ireland’s prominent mountains and hills were climbed at Lughnasadh into the modern era. Over time, this custom was Christianized and some of the treks were re-cast as Christian pilgrimages. The most well-known is Reek Sunday—the yearly pilgrimage to the top of Croagh Patrick in County Mayo in late July.[17] As with the other Gaelic seasonal festivals, feasting was part of the celebrations.[18] Bilberries were gathered on the hills and mountains and were eaten on the spot or saved to make pies and wine.[19] In the Scottish Highlands, people made a special cake called the lunastain, which was also called luinean when given to a man and luineag when given to a woman. This may have originated as an offering to the gods.[20] Another custom that Lughnasadh shared with Imbolc and Bealtaine was visiting holy wells. Visitors to holy wells would pray for health while walking sunwise around the well. They would then leave offerings; typically coins or clooties (see clootie well).[21] Although bonfires were lit at some of the open-air gatherings in Ireland, they were rare and incidental to the celebrations.[22]

In Ireland, some of the mountain pilgrimages have survived. By far the most popular is the Reek Sunday pilgrimage at Croagh Patrick, which attracts tens of thousands of pilgrims each year. The Catholic Church in Ireland established the custom of blessing fields at Lughnasadh.

The Puck Fair circa 1900, showing the wild goat (King Puck) atop his ‘throne’

The Puck Fair is held each year in early August in the town of Killorglin, County Kerry. It has been traced as far back as the 16th century but is believed to be a survival of a Lughnasadh festival. At the beginning of the three-day festival, a wild goat is brought into the town and crowned ‘king’, while a local girl is crowned ‘queen’. The festival includes traditional music and dancing, a parade, arts and crafts workshops, a horse and cattle fair, and a market. It draws a great number of tourists each year. In recent years, other towns in Ireland have begun holding yearly Lughnasa Festivals and Lughnasa Fairs. Like the Puck Fair, these often include traditional music and dancing, arts and crafts workshops, traditional storytelling, and markets. Such festivals have been held in Gweedore,[23] Sligo,[24] Brandon,[25] Rathangan[26] and a number of other places. Craggaunowen, an open-air museum in County Clare, hosts a yearly Lughnasa Festival at which historical re-enactors demonstrate elements of daily life in Gaelic Ireland. It includes displays of replica clothing, artefacts, weapons and jewellery.[27] A similar event has been held each year at Carrickfergus Castle in County Antrim.[28] In 2011, RTÉ aired a live television program from Craggaunowen at Lughnasa, called Lughnasa Live.[29] In the Irish diaspora, survivals of the Lughnasadh festivities are often seen by some families still choosing August as the traditional time for family reunions and parties, though due to modern work schedules these events have sometimes been moved to adjacent secular holidays, such as the Fourth of July in the United States.[10][11] The festival is referenced in Brian Friel‘s play Dancing at Lughnasa (1990), which was made into a film of the same name.

Lughnasadh and Lughnasadh-based festivals are held by some Neopagans, especially Celtic Neopagans. However, their Lughnasadh celebrations can be very different despite the shared name. Some try to emulate the historic festival as much as possible,[30] while others base their celebrations on many sources, the Gaelic festival being only one of them.[31][32] Neopagans usually celebrate Lughnasadh on 31 July – 1 August in the Northern Hemisphere and 31 January – 1 February in the Southern Hemisphere, beginning and ending at sunset.[33][34][35][36][37] Some Neopagans celebrate it at the astronomical midpoint between the summer solstice and autumn equinox (or the full moon nearest this point).[38] In 2013, this is on 7 August in the Northern Hemisphere.[39]

Celtic Reconstructionists strive to reconstruct the pre-Christian religions of the Celts. Their religious practises are based on research and historical accounts,[30][40] but may be modified slightly to suit modern life. They avoid syncretism (i.e. combining practises from different cultures). Celtic Reconstructionists who follow Gaelic traditions tend to celebrate Lughnasadh at the time of “first fruits”, or on the full moon nearest this time. In the Northeastern United States, this is often the time of the blueberry harvest, while in the Pacific Northwest the blackberries are often the festival fruit.[11][40] In Celtic Reconstructionism, Lughnasadh is seen as a time to give thanks to the spirits and deities for the beginning of the harvest season, and to propitiate them with offerings and prayers not to harm the still-ripening crops. The god Lugh is honoured by many at this time, and gentle rain on the day of the festival is seen as his presence and his bestowing of blessings. Many CRs also honour the goddess Tailtiu at Lughnasadh, and may seek to keep the Cailleachan from damaging the crops, much in the way appeals are made to Lugh.[11][40][41][42]

Wiccans use the names “Lughnasadh” or “Lammas” for the first of their autumn harvest festivals. It is one of the eight yearly “Sabbats” of their Wheel of the Year, following Midsummer and preceding Mabon. It is seen as one of the two most auspicious times for handfasting, the other being at Beltane.[43] Some Wiccans mark the holiday by baking a figure of the “corn god” in bread, and then symbolically sacrificing and eating it.[33]

Donkey & Cart In The Square Killorglin

On Bag for an International Flight

Barbara Castle, Minister in the British Government talking with Michael Houlihan during her visit to Puck Fair,1967

The Horse Fair of 1978 on Market Street. Sean Moriarty of Iveragh Road is on the left of the picture

Danny Sullivan of Iveragh Park and Enfield, London at the Killorglin-London Reunion in The Kingdom Bar, Kilburn, November 2014