Above; A young Jack Doyle poses for a picture.

Jack Doyle (31 August 1913 in Cobh, Ireland – 13 December 1978 in Paddington, London), known as “The Gorgeous Gael” was a boxer, a Hollywood actor and an accomplished tenor. He was born Joseph Doyle and known to his friends as Joe but changed it to Jack when starting his professional career.

He was born into a working-class family in Cobh, Co. Cork in 1913. At 6 feet 5 inches, Doyle was always good with his fists and in 1929 he joined the Irish Guards regiment of the British Army based in Wales. There he quickly excelled at boxing and was famed for his strong hooks that won him the British Army Championship. A sensational record of 28 straight victories, 27 by knockout, brought him to the attention of promoter Dan Sullivan. He turned pro and notched up 10 victories on the trot all inside 2 rounds, making him the hottest thing in the sport. In July 1933, at the age of 19 he missed out on the British Heavyweight title to the holder, Welshman, Jack Peterson. Witnesses claim that he had done most of his warming up in a pub not far from the bout. Within the opening seconds he knew he was in trouble and decided to take the easy way out. He was disqualified for repeatedly punching low. Shortly after, his singing voice was discovered by Dr. Vincent O’Brien, voice coach to Count John McCormack and soon his soft tenor voice and handsome looks were selling out the London Palladium and the Royal in Dublin. Jack was subsequebtly signed up by Decca. In 1934 Doyle travelled to the United States and several records were produced including the popular “South of the Border” a duet recorded with his then wife Movita. But his love for alcohol coupled with his generous nature soon started to take its toll on his health. Below; Jack weighs in before a match.

He travelled to America in 1934 and soon carried on his high living of gambling, ladies and drink. His good looks and deep pockets opened the party circuit to him. As a result of this, he starred in two movies, Mc Glusky The Sea Rover (1934) and Navy Spy (1937). Later in life he had minor parts in a number of British films. While in the States he continued to box, taking on one Buddy Baer in August 1935. Like his fight against Jack Peterson, it is said that Doyle had consumed the best part of a bottle of brandy before the bell rang and was in no fit state to stand. He was knocked down loaded in the first round. It was around this time that Jack and Judith Allen, who had been the girlfriend of Buddy Baer’s younger brother and fellow boxer Max, had a whirlwind affair and married. Unfortunately their marriage was also a whirlwind and didn’t last. By the late 1930s Doyle was involved with the actress Movita Castandeda. 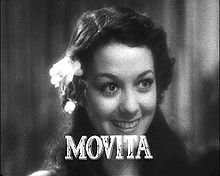 Above; Movita in a trailer for Mutiny On The Bounty (1935 Film) and Below; A rare picture of Jack and Movita.

Following a celebrity wedding to Movita in Dublin’s Westland Row Church, they toured both sides of the Irish Sea, selling out music halls and opera houses. Around this time Jack fought his last professional fight, against a journeyman called Chris Cole in front of 23,000 in Dublin’s Dalymount Park. Arriving late for the bout after a stop at The Clarence Hotel for alcoholic beverages, the inebriated Doyle went down in the first. Movita packed up and moved back to Hollywood, where she went on to marry Marlon Brando. Shortly after, Doyle found himself residing at Mountjoy Jail in Dublin for knocking out a Garda Detective in a Ranelagh pub. He moved to England and his spiral downwards into alcoholism and bankruptcy continued. He found his friends had deserted him as fast as his bank balance was spent. In his own words as to how his managed to lose everything he was quoted to have said “slow horses and fast women” were his downfall. He odd-jobbed for a while but when he couldn’t afford the rent on his humble flat, he took to sleeping at the homes of friends, in Pimlico London. His only source of income during this time was an allowance he received from Movita.

Above; Jack in his later years. In 1947 Doyle was imprisoned in Sligo Gaol for issuing a cheque which later bounced. He served four months of hard labour. Jack died in 1978 at St. Mary’s Hospital in Paddington. At the time it seemed he would be buried in a pauper’s grave in London however when news of his death reached Ireland, a number of members of the Cork Ex-Boxer’s association decided to act. In conjunction with Cobh undertaker Paddy Barry, they brought Jack’s remains home. Large crowds lined the streets of Cobh as the coffin led by a lone piper and topped with Jack’s trademark – a red carnation – was brought on its last journey. He was buried in the Old Church Cemetery and his grave is visited by thousands of people every year. Shortly before his death, he was interviewed by a journalist who asked him if he had any regrets about not spending his money more wisely. “None at all,” he said, “twas never a generous man who went to hell.” Below; Jack Doyle’s Funeral procession through Cobh.

RTE featured Jack Doyle in their series True Lives in a programme called Jack Doyle, a legend lost in September 2007. A book, foreworded by Barry McGuigan called Jack Doyle: The Gorgeous Gael was released in late 2007. Below; The grave of Jack Doyle.

Back in Puck Fair 1953, Butty promoted a wrestling match between himself and Jack Doyle in Joe O’ Shea’s Paddock in Langford Street. The wrestling match was timed to take place after the coronation and enthronement of King Puck. By six thirty on that warm evening of Monday August 10th, crowds began to surge towards O’Shea’s Paddock to witness what was billed as ‘The greatest attraction ever’. For the previous week before Puck, this small field became a hive of activity and a ring was erected along with dozens of 9×3 planks to accommodate seating for the spectators. Peter Teahan’s house across from the entrance was engaged for the day, the front downstairs room was used as a booking and pay office with the bedrooms being used as dressing rooms. Only the best would be good enough for the prime actors in the drama that was about to unfold, as described by Radio Eireann that morning. Dan Parker journalist with the New York Times was present to cover the event. From The Express newspaper was Ron Walker along with David Gallop form The Mail. Press and posters announced the forthcoming event two weeks prior to the date and ringside seats were booked at 20 shillings a go!! It was Jack Doyle ‘The Gorgeous Gael’ V Michael ‘Butty’ Sugrue, Ireland and Europe’s Strongest Man. The event was to take place at 7;30 pm and was to be a Ten Round Heavy-Weight Battle. This event was coupled with other super contests such as Norman Steward, heavy-weight champion of Scotland Vs Jerry O’ Sullivan from Caherciveen, and Red Staranoff, ‘Russia’s King of Wrestlers’ Vs Ron Knight, ‘London’s Wonder Boy’. The Programme got off to a punctual start so as to take advantage of the evening light. Stewart was first into the ring followed by that muscular Iveragh man, Jerry O’ Sullivan, better known to his friends and neighbours as ‘Jer John Tade’. This spirited match ended in a draw. Next was the Match of the Titans, Butty was first into the ring where after prolonged cheering he was introduced by the ref to the crowd as follows; ‘Ladies and Gentlemen, please welcome Michael ‘Butty’ Sugrue (more cheers), six months ago he took up wrestling and placed himself in the hands of the great Freddie Mills (more cheers) in the contest he will be conceding height and weight. He is five feet eight inches tall and weighs in at 13 stone 7lbs, but against that, he has youth on his side. He is only 27 years of age and also has super human strength.

Above; Butty and Jack pose before the big wrestling match. Notice the cigarette in Jack’s left hand. The cheers could be heard a mile away as Butty surveyed the scene and waved to one and all. When Jack Doyle arrived in Kerry, he spent a final day training at a secret location. However, he paid a visit to Killorglin on the eve of Puck Fair where he and his minders had a drink or two at Jack Denny Con O’ Sullivan’s bar, and at the request of many people he went on the lower stand of the Puck where he regaled the crowd with his favourite song, ‘When Irish Eyes Are Smiling’. Willie Mangan the resident musician accompanied Jack on the accordion. When Jack entered the ring he also received a good welcome plus many shouts of wit from the crowd. The ref called order and said; ‘Ladies and Gentlemen, I give you the one and only Jack Doyle, star of Film and Stage, Singer, Boxer and now Champion Wrestler. Last week he defeated Two Ton Tony Galento, also Man Mountain Dean, as well as the Basque Champion of Spain. He weighs 17 stone, six feet five inches tall and thirty nine years of age’. The two contestants then posed for some photos, went back to the centre of the ring, a few words from the ref, a hand shake and the contest was on. For the first minute or so they skipped around avoiding all bodily contact. In response to much urging from the fans, Butty made a dash at the man from Cork and floored him. Here they laid in a bear hug. Suddenly Jack’s nobel head was in an arm lock by Butty and the fans roared for blood. A knee to the back followed by a ‘belt’ of his boot from Butty and the ‘match of the century’ was finished. Down went the Gorgeous Gael. It was all over inside one round. Jack Doyle limped back to his dressing room, a look of real or faked pain on his face. Legend has it that the real fight occurred between the two later that night when it came to dividing the purse! The third bout of the day started as dusk drifted in. As a result of this, the crowd slowly began to melt away to the pubs and restaurants of the town, regretting the money and time they had spent in the Paddock. However the outcome, this contest and the men who took part and organized the bouts are now part of the history and folklore of Puck.

A William Lawrence photograph of the Puck Stand in 1900